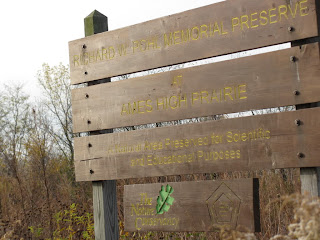 As many people might not know, the Ames High School's prairie has been around for quite some time now. It's mainly open for the public, with 27 acres, kids in science classes, people from around Iowa, etc are welcome to this peaceful preserved area. This preserve is a tallgrass prairie, with lush native grasslands that are commonly found in the midwestern areas with high rainfall and rich soils. They are dominated mostly by big blue stem and Indian grass. Around 1970, this was going to be purchased for a parking lot or a football field, but the community wanted to value the land with preserved plants, animals, etc. This gave the school a 49- year lease for the prairie. It's specifically named after Richard W. Pohl Memorial at Ames High Prairie, for the honor of him being an Iowan grass taxonimst and prairie advocate. 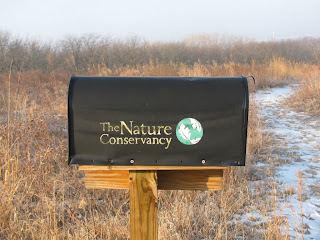 The Nature Conservancy and Iowa prairie network co-sponsor prairie walks from June to September. People are not allowed to hunt, or dig in the prairie soil.
From this point on we will explain what's in the prairie, and what we can do as a community.

Our group members: Mauro Lopez, Hannah Huffman, and Mai Mai Wang decided to do this project to have everyone aware of what's going on with our prairie. Learning goals we've learned, and more ways to know about photography. This can show the public how much biodiversity we have on the prairie. Also it can show us that the prairie is worth keeping. Not only did we just take photos. We also found out general and scientific facts about why the prairie is worth keeping. We picked this project because we all have interests in photography. It was a perfect thing to do to talk about the prairie, and also take pictures of our school's prairie. We are three students in the class of Environmental Science. This project mainly is for those to know about the prairie. (All the photos used here are self taken by the members of the group)

Our Task: Was to document the perspectives of the prairie, keeping track of what's happening with and around it. Month by month, we took pictures of the stages when the plants first bloom, etc.

Although there was not much happening with the prairie our first semester to take pictures of, we still had to learn a lot of the prairie. People know the basics of the prairie, but not everything. 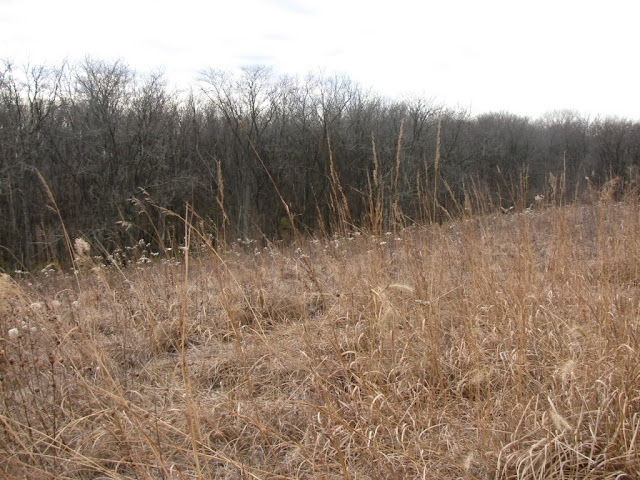 The History of the Prairie.
Before the 1800's, the prairies in Iowa were over abundant. European settlers decided to use the land to start farms because they were fertile and rich in soil. As a result, more and more farms were being made and less prairies were still around because of this. This caused a h u g e impact on the ecosystem. A lot of animals, plants were dying from the prairie because the cycle was damaged already. More than 85% of the prairie that used to be in Iowa, was all gone and less than 99.9% still exists today.

What we recently learned what the prairie can do?

Learning Goals:
This project can adequately relate to (#'s) 1, 2, 3, and 6.
(# One) * In this view, every species has a value and role in the prairie. It has the right to exist, whether or not it is known to be useful to humans. In fact, since humas have gained so much power over nature, they should conserve all the species. All life is sacred and must be protects. It is thus an ethical and moral issue. Hunting by the wild animals is an unethical  value required for the balance in a biodiversity. Just not in the prairie. (Clear understanding of learning goal one)
Economic values: - The goods and services that biodiversity provide human beings
---Goods such as food, medicine, building material, fiber, and fuel
---Ecosystem services such as the maintenence natural cycles, regulation of climate, and absorption of pollution. 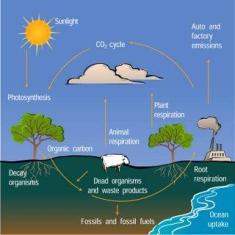 THE DIAGRAM SHOWS THE CARBON CYCLE WHICH IS CARRIED OUT BY THE BIODIVERSITY AUTOMATICALLY.
(general example to the prairie)

Basically it mainly changes in the ecosystem, with changes through the prairie, it can react dramatically. For example, if an animal has a high population in the prairie, the more there are, the more plants they eat, the less plants produce, and the population of the animal dies. Too much can be too much, and less can be too less.
( # two) Population and organization:
The member of a species living and interacting within a specific geographichal region are together called a population. Neem trees in a forest, people in a country, and gold fish in a pond are examples of populations.There is diversity in most natural populations. While there are broad similarities among the members, they don't all look exactly alike. nor do they all behave in the same way. The prairie can be an example of a population. Many plants and animals roam the prairie lands, while many prairies used to be in Iowa, farms seemed to decrease the populations of most animals and plants. For example, we always have to start controlled fires in the prairie to control the population of trees, since there used to be bigger animals that ate and stepped on the fields, trees didn't grow as much. But now that humans have controlled this reserved area, the buffalos, etc have migrated somewhere else. There are several concerns for the remaining prairies. Because the soil is so fertile that the biome has been turned into farms or ranches. The result of the over-use by farmlands is a fragmentation of once used grasslands. (http://www.thewildclassroom.com/biomes/grasslands.html)

(# three) Ecosystem Evolution:
An ecosystem is a community of living organisms (populations of species). The organisms interact with one another and with their non-living physical and chemical environment. The interactions are such as to perpetuate the community and to remain stable under varying conditions.
A puddle of water, a stream, a clump of bushes, a thick forest, or a large-desert- all are ecosystems of this planet are interconnected and interdependent.
Through out the years since the Europeans were here, the ecosystems of the prairies still are evolving and changing to this day because of the environment, and climate changes, and human contact. Prairies can't handle themselves anymore. It's gotten to the point where humans have to control the land.

(# six) The Cycling of Matter
cycling of matter is when for example a rabbit (consumer) is eating plants (producer) then the rabbit dies and a vulture (scavenger) comes and eats the remains of the rabbit and the decomposers eat the skeleton of the rabbit, which gets in the soil, and makes the plants grow again, and the cycle starts all over again. This relates to the prairie significally. This happens with a lot of the animals living in the prairie. The cycle is then repeated over and over again. 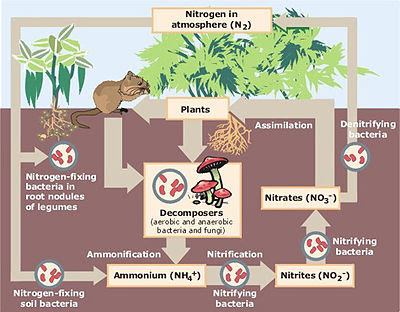 Here's a brief visual example of the cycling of matter. 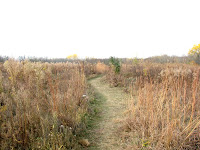 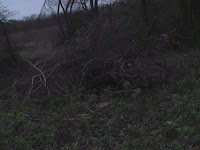 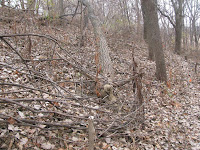 Locations of these three:
Reservation: Back doors of the science rooms, or behind the library or parking lots.
Reconstruction: Is found right behind Mr.Todd's room.
Restoration: Can be found behind the location that of the reconstruction area. You follow the path and it will lead you to the restoration area.

Why do we have these?
It's quite easy to explain, the reserved part is for a place where it remains preserved and no one has damaged it with anything. We still control the way the plants grow, just not chemically. Reconstruction is the area where there has been countless amounts of seeds that were blown to this area that are not originated from Iowa, this caused them to grow and make trees that have been dominating for quite some time now, although it sounds o k, it's not. These trees are growing where the natural plants and trees that grow here, don't have enough space. Buckthorn is a perfect example. It's been polluting the area with it's seeds and more and more are growing which the prairie doesn't need. Less original plants, the less the cycle is created and there won't be life anymore if this continues to go on.  Restoration is the area where we are trying to grow some of the original plants back to the prairie, by using human contact, we planted the seeds from our class.

Who is Carl Kurtz and why is he involved here?
Carl Kurtz is a nature photographer who's helped us with the project. He came in around November/December and again on the April 30th. He's helped us with our editing skills for our photos, he's given us a brief description of what he does when he came. He gave us ways to take our pictures, where we can make the picture look quite a bit more realistic. (The bottom one is an example) 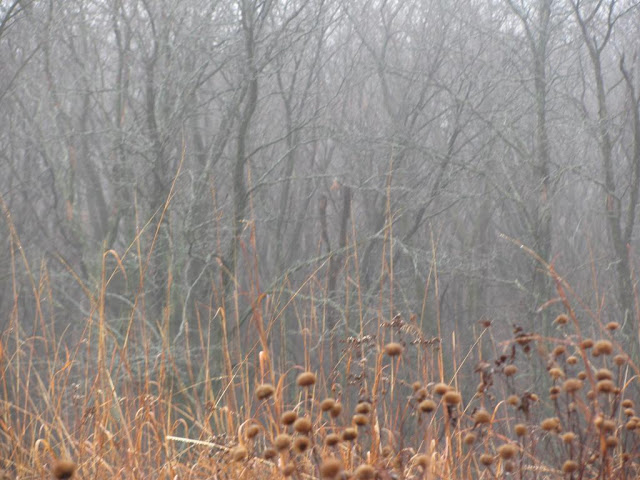 The big question is...
How does this impact the environment?
Our project was to have people be well aware of the prairie and the cycle it has. Many people tend to just walk into the prairie and just walk through it, even damage some of its surroundings. We are here to tell them and let them know this is a preserved area that's been here for many years, we are trying to keep it safe and environmental-friendly. Our photography account on photobucket also explains the plants that are in the prairie, and the month-to-month of the plants growing on the prairie. This is open to the public and can be used for future use for everyone, locations of the prairie, etc.
*Note: People need to be well aware that leaving trash and Iowa's law prohibits the destruction of public property, including plant material. Harvesting of seed or other plant parts requires a permit obtained from the local DOT office.
We want to keep the area with natural used seeds that have been in the prairie for many years, if we use seeds from other regions, it can damage the ecosystem. 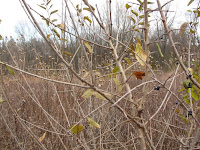 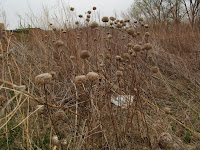 Where exactly is the prairie located?
School: 1921 Ames High Drive  Ames, IA 50010
This leads to the high school, and you can follow a path next to left and it will lead you to the path where in the back it's a elegant view of the prairie.


Thanks for viewing our page, anymore questions or want to visit the prairie one day? Simply contact Mr.Todd! Simply send him a message here.


-Prairie Photography (Group #35)
Posted by Ames High Prairie at 9:27 AM No comments: